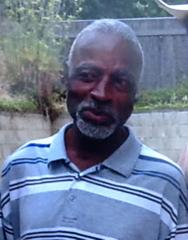 Update October 8, 2013 - Johnny Singleton has been found in the 600 block of Main Street and is now home with family, according to a Sheriff's tweet thanking community members for tips.

October 6, 2013 (El Cajon) – A search is underway  to find  64-year-old Johnny Singleton. He walked away from his home in the 200 block of Hart Drive in the unincorporated area of El Cajon around 2:00 p.m. today.  He has medical issues which put him at risk. He might be trying to find his way back to his old neighborhood in the City of San Diego at 30th Street and Imperial Avenue.

Johnny was last seen wearing a light grey polo shirt with horizontal stripes, blue jeans, white and blue Nike shoes and a ball cap. He has a goatee and short grey hair. He does not drive a car. He likes football, Pepsi and tacos.