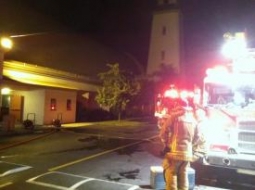 October 12, 2013 (Spring Valley ) – Eugene William Volk, 45, has been arrested and charged with arson in connection with the fire at Santa Sophia Church on October 8.

Detective Calvert, lead investigator from the San Diego Sheriff's Department, developed sufficient probable cause to arrest Volk, said Detective Portillo-with the Sheriff’s Bomb Arson unit which located Volk walking less than a quarter mile from the church at the intersection of Campo Road and Conrad Drive  on October 13.  Authorities have not revealed what evidence they believe links Volk to the crime.