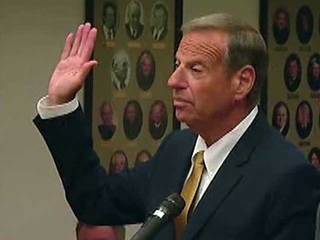 The victims were not named, identified only as “Jane Does.”  The felony case entailed Filner kissing a woman against her will and using the “Filner headlock” to restrain her.  Prosecutor Melissa Mandel  stated that the midsdemeanors  included kissing a woman on the lips without consent at a “Meet the Mayor” event and fondling another woman’s buttocks while having a photo taken at a rally.