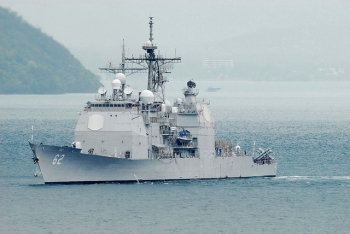 November 17, 2013 (San Diego) – A malfunctioning drone has struck the U.S.S. Chancellorsville on Saturday night off the Southern California coast near Point Magu, the Navy announced.

Two sailors sustained minor burns. The guided missile cruiser ship will return to San Diego for an assessment of damages. The Navy did not reveal what type of drone went awry. However the Los Angeles Times reports it was a 13-foot-long drone with a six foot wingspan that slammed into the port side of the ship.

The accident heightens concerns among East County residents who have voiced alarm over a proposal to test drones, or unmanned aerial vehicles (UAVs) over San Diego’s backcountry.