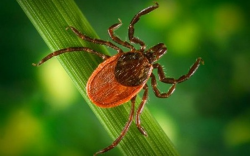 November 25, 2013 (San Diego) --Ticks might be tiny, but they can pack a punch when it comes to affecting your health. The County’s Health and Human Services Agency warns of an increased possibility of contracting a tick-borne disease.

“It’s important to know that there are several diseases carried by ticks,” said Wilma Wooten, M.D., County Public Health Officer. “People who work or play in grassy or brushy areas need to take special care to avoid exposure to ticks.”

In 2012, HHSA received reports of San Diego County residents with confirmed or probable tick-borne illnesses.  This included 14 cases of Lyme disease, two cases of Rocky Mountain spotted fever, two cases of other rickettsial diseases (which include spotted and typhus fever), and one case of ehrlichiosis, a bacterial disease affecting people and animals. Ticks can also carry tularemia and cause tick paralysis.