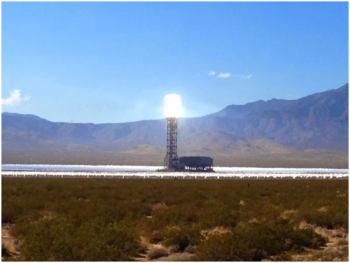 November 25, 2013 (California) – Desert solar projects have been touted as environmentally friendly.  But now disturbing evidence has emerged that these projects are incinerating birds flying overhead.Two months ago,  34 birds were found dead or injured at Ivanpah Solar (photo, left, by Tom Budlong) owned by BrightSource Energy in  San Bernardino County, California. Almost half had singed feathers and some had nothing left but spines where feathers melted from  reflected beams of sunlight, according to a report  in The Desert Sun.

The toll was even worse in October, when 52 dead birds were found at the site, 17 with scorched feathers (see photo, below right)  Ivanpah, still in testing phase, is the world's largest solar facility -- but it's not the only one frying birds. Another 19 birds were found dead at another project, Desert Sunlight, also in California.  More such facilities are planned, incdluing Palen’s proposed project in the Coachella Valley that would be located near two wildlife refuges where migrating birds stop in the Pacific Flyway.