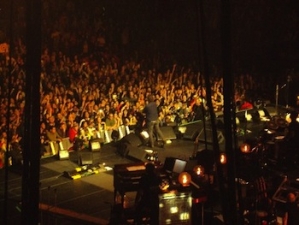 November 27, 2013 (San Diego) – Greg Dunne, best known to our readers as our “Bird Talk” columnist, sent us these photos and review comments on the Pearl Jam concert at San Diego State University.

“The show had everything. All the great songs to name a few: Even Flow, Black, Just Breathe, a Who song Baba O'Riley (We all know as Teenage Waste Land). A great rendition of Star-Spangled Banner by lead guitarist Mike McCready. Was it as good as the classic by Jimi Hendrix? Dare I say yes?” he wrote, adding that while “not as iconic as the great Jimi's rendition,” the concert was “a love fest between Pearl Jam and the fans. The audience knew just when to jump in and sing along with Eddie.”