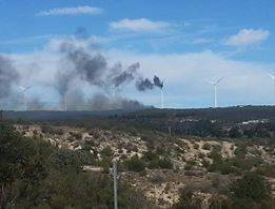 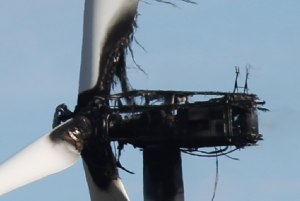 December 16, 2013 (Campo) – A wind turbine on a ridge overlooking the Golden Acorn Casino exploded today, sparking several spot fires in surrounding brush that collectively charred about a half an acre.

David Elliott, a Manzanita tribal member, lives about  quarter of a mile from the wind facility on the neighboring Campo reservation. At first, he mistook the fire sounds for gusty wind. Then he walked outside and saw the turbine burning.  “The turbine did start several spot fires,” he said.  “If the wind had been coming from the northwest or west then my home, one of the closets homes to the turbines, would have definitely been in danger because we have brush on this side of the turbines and we would have had a major fire.”  Hear audio of his interview with ECM: http://kiwi6.com/file/bk3qywd787