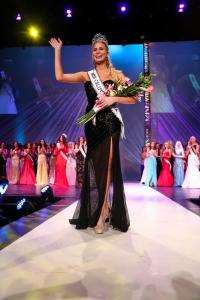 January 5, 2014 (San Diego’s East County) – Cassandra Kunze, a resident of Crest and a student at San Diego State University, has been crowned winner of the 2014 Miss California USA competition.

Kunze, 20, is working to complete a double major at SDSU in international security and conflict resolution and television/film media.  She represented Beverly Hills at the time of her pageant entry and will next compete at the Miss USA pageant, representing California.