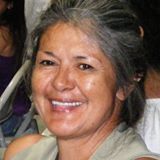 March 13, 2014 (Santa Ysabel)—Iipay tribal member June Sortore has refused a request from tribal chairman Virgil Perez  to take down  a  statue of a hand with the middle finger raised.

In a letter delivered to Sortore by tribal law enforcement, Chairman Perez called the hand-made statue ““indecent and offensive,” noting that it can be viewed by children on a school bus. Though the Iipay Tribal Chairman says the middle finger is an “obscene gesture,” Sortore says she erected the statute as a symbol of defiance against former Tribal Chairman Johnny Hernandez.

“I built the statue to show him we had not lost nor have we given up hope,” she says.  She claims her form of expression is protected as free speech under the U.S. Constitution and further, that the symbol has historical significance.