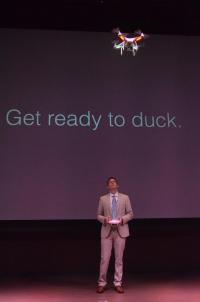 March 26, 2013 (San Diego) A talk held yesterday at San Diego State, hosted by SDSU’s Center for Science and Media (a collaboration of the School of Journalism and Media Studies, College of Professional Studies and Fine Arts and the College of Sciences) raised important questions on how to use drones in media gathering--also demonstrating how effective drone coverage could be, as a drone whirred overhead transmitting images.

Professor Matt Waite from the College of Journalism and Mass Communications at the University of Nebraska-Lincoln, founder of the Drone Journalism Lab, brought a small drone to show it to the public. (For the record, the Federal Aviation Administration (FAA) has shut his Lab down for the moment, as well as drone usage by the Washington Nationals and a beer company in Minnesota. The proposed use of Drones by Amazon.com to deliver goods is also not permitted under present rules.)