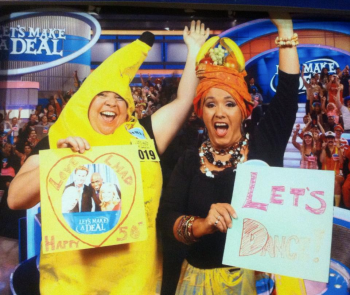 March 31, 2014 (San Diego's East County) -- Kathleen Hedberg is best known locally as an outspoken advocate for ratepayers on the Helix Water Board.  But in February, Hedberg's outgoing ways--along with a bright yellow banana costume--caught the eye of Let's Make a Deal's host.

Hedberg was chosen as a contestant on the popular TV game show's 50th anniversary airing -- and won a gleaming new 2014 Chevrolet Spark car for her "a-peeling" efforts.