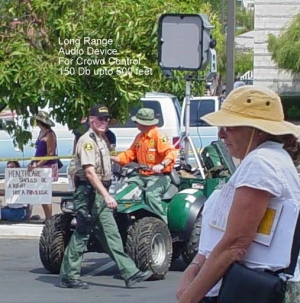 Is the LRAD disabled, or not?

January 28, 2010 (San Diego) San Diego County Sheriff Bill Gore drew sharp criticism from the public and his three political opponents following an article we published last fall, revealing that his office purchased a long-range acoustic device (LRAD) and rolled it out at Congressional healthcare forums and other events.  The Sheriff’s office held a press conference in September to announce that the sonic weapons feature had been “disabled.”