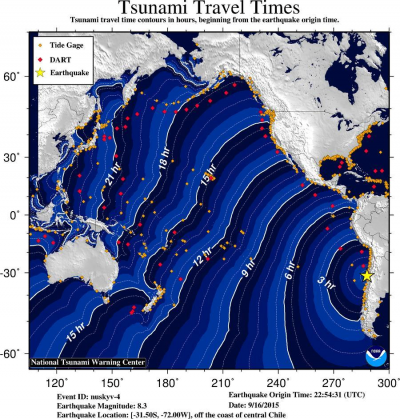 September 16, 2015 (Orange County, California) -- An 8.3  magnitude earthquake has occurred off the coast of Chile has led to issuance of a Tsunami Advisory for the California coast from Orange County north to San Luis Obispo. San Diego County is  not included in the advisory.

A Tsunami Advisory is issued for Tsunamis (or tidal waves) expected to be 1 to 3 feet higher than normal--capable of producing strong currents or waves dangerous to persons in or near the water.  Greatest threats will be the strong underwater currents early Thursday which will be hazardous to boaters and swimmers; coastal structures may also be damaged.  The tsunami arrival time ranges from 4:46 a.m. to 5:10 a.m. tomorrow (Thursday) morning along the southern California coast.

The tsunami in Orange County is expected to be a foot high, with 4 to 8 inches expected in San Diego County.

Hawaii is also on alert for a tsunami.

Update 3 p.m.:  The tsunami effect locall remains in effect through 5:46 p.m. today for the entire west coast following an 8.8 quake in Chile.  An early tidal surge proved minor in San Diego though Santa Monica had tides 2.2 feet above normal sea level. In other regions, second and third waves were higher than the first.

February 27, 2010 – A powerful earthquake struck Chile off the coast of Maule during the night. The U.S. Geological Survey has upgraded the quake to 8.8.  A tsunami warning has been issued for coastal areas in Chile and Peru; a nine-foot tsunami wave has been reported.