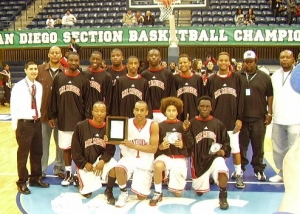 (San Diego) March 10 - Harry Brazelton sank a free throw after time expired to give the Matadors of Mt. Miguel High School a thrilling 47-46 comeback victory over the Vikings of La Jolla High School. The game was one of several CIF San Diego Section championships played over the weekend at Jenny Craig Pavilion on the campus of USD.

Brazelton had the ball with just a few seconds left in regulation with the score tied at 46. While going up for a three point shot attempt, he drew a shooting foul a split second before the horn sounded, and was awarded three free throws. He would only need one. With the lanes emptied, Brazelton sank the first free throw attempt, making the other two superfluous.