7,2012 (Valley Center) – A fire that began in the 15000 block of Woods Valley Road is now 100% contained, the San Diego Sheriff reports. The fire, which began around 4 pm near North Lake Wohlford Road and Woods Valley Road, prompted evacuations late this afternoon.

The blaze burned approximately 25 acres, according to Cal-Fire. 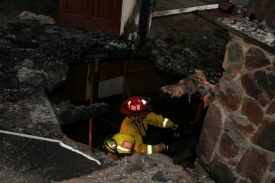 March 20, 2011 (Valley Center) – An electrical fire that started in the basement has severely damaged Saint Stephens Roman Catholic Church in Valley Center, causing an estimated $150,000 in damage. County building inspectors have found the structure to be unsafe, requiring immediate stabilization before salvage and repair can begin.

Update 2:35 p.m. Forward spread of this fire has been stopped.

September 9, 2010 (Valley Center) 2:15 p.m. – Cal-Fire is on the scene of a two- to three-acre brush fire off of Old Guejito Grade Road and North Lake Wohlford Road, near the community of Valley Center (Thomas Brothers Map page 1111 C-1). The fire was reported at 1:48 p.m. and the cause is under investigation. The fire is burning to the east and there is no immediate structure threat.

May 21, 2010 (Valley Center) – Cal-Fire firefighters are dousing hot spots from a half-acre brush fire near 29902 Valley Center Road. The fire’s spread has been stopped. The blaze, which began at 3:46 this afternoon, was caused by youngsters playing with illegal fireworks.