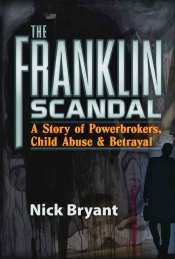 May 23, 2010 (San Diego) –Author Nick Bryant reveals a tragic and sinister tale of a nationwide pedophile ring that pandered children to a cabal of the rich and famous, stretching from Southern California to cornfields of Nebraska and beyond to our nation’s capitol. The Franklin Scandal reveals political powerbrokers who had access to the highest levels of our government and connections in the CIA. One of those powerbrokers is Lawrence E. "Larry" King, Jr. (no relation to the TV talk show host of the same name), identified by other sources as the primary pimp of the nationwide pedophile ring.

This book gripped me and held my attention like none I have ever read; I couldn’t put it down. The Franklin Scandal is riveting!