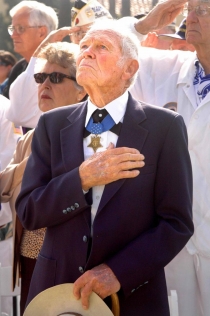 May 29, 2010 (San Diego’s East County) – John Finn, the oldest living Medal of Honor recipient honored for his heroism during the Japanese attack on Pearl Harbor, died May 27 in a Chula Vista nursing home.

Finn manned a machine gun from an exposed position at the Naval Air Station at Kaneohe Bay, Hawaii on December 7, 1941, firing at the attacking planes for more than two hours despite being hit 21 times by bomb and bullet fragments. The young Lieutenant left his post only when directly ordered to seek medical attention, then returned after treatment despite severe pain to supervise rearming of returning squadron planes.  For his courageous actions, he received the Medal of Honor, the highest award for valor during combat that a U.S. military member may earn.