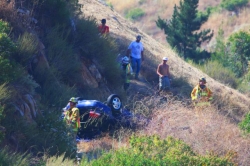 July 1, 2010 (Lakeside) -- Two women found dead at the scene of a car crash off Highway 67 Tuesday in Lakeside have been identified as Thao Richardson, 57, and her mother, Than Lyi, 72. Today, Sheriff’s officers arrested Michael Eugene Richardson, 57, for statutory rape of his 17-year-old niece.

An investigation into the crash has concluded that it was staged.  Authorities on the scene told ECM that “suspicious evidence” was found. Richardson has not yet been charged with the double murder, but he is considered “the only person of interest” in those deaths by Sheriff’s officials, according to other media reports today.