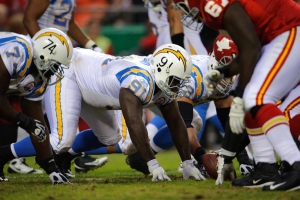 August 13, 2010 (San Diego) - For every Peyton Manning or Chad Ochocinco in the National Football League, there exist hundreds of players whose opportunities to play professional football come with no guarantees. Not only do these players not get drafted in the early rounds, many do not get drafted at all and have only an outside chance of playing as undrafted free agents.

Chargers defensive tackle Ogemdi Nwagbuo (more commonly known as 'O.G.') is one such player. His path to the NFL is not typical of most players who play several years of youth and high school football before moving on to college and up to the pros.