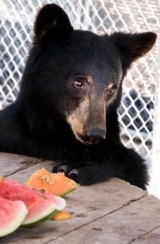 Fish & Game officials brought the bear to LTB in hopes of savings its life.  The animal was causing problems at a Mt. Baldy campground in San Bernadino, where six to 12 young bears are killed each year. But LTB may only be a temporary haven for Liberty, who will soon outgrow her temporary home and require a much larger and secure habitat. Brink urgently seeks donations to construct an expanded enclosure.