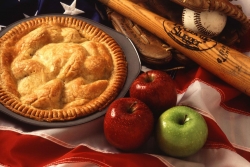 September 27, 2012 (Julian)—Ah, autumn! Fall is in the air—and Julian celebrates the season with a full month of “Apple Days” activities ranging from apple picking to an old-fashioned melodrama (boo the villain and cheer the heroine) and yes, an Oktoberfest.

June 8, 2009 (Julian)--The Julian Fourth of July parade joins the town's Apple Centennial Celebration when it steps out on Main Street this year. The parade, an annual event for more than 15 years and dubbed by many as the "best little town parade in America," has adopted As American as Apple Pie as its theme.