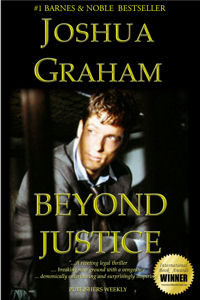 September 8, 2010 (San Diego’s East County) -- San Diego author Joshua Graham has written a riveting and supernatural legal thriller, Beyond Justice, that at times has spiritual overtones. Beyond Justice is the story of Sam Hudson, a reputable San Diego attorney who descends into a hell not of his making after authorities wrongfully convict him of the brutal rape and murder of his wife and daughter.

On Death Row, he awaits execution by lethal injection while he agonizes over the fate of his young son Aaron, who was beaten into a coma during the attacks.