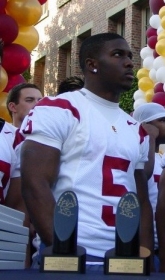 September 17, 2010 (La Mesa) - Former Helix High School football standout Reggie Bush has decided to forfeit the Heisman Trophy that he won in 2005 while playing for the University of Southern California. Bush's decision comes before the Heisman Trophy Trust, the award's governing body, was expected to vote to strip Bush of his award. It marks the first time in the trophy's 75 year history that it has been forfeited.