Editor's note: This issue is slated to be addressed by Supervisors on Wed. Feb. 9.

February 8, 2011 (San Diego’s East County) -- The current controversy, ginned-up by Save Our Rural Economy (S.O.R.E.), an apparently well funded coalition of builders, developers, Realtors, some farmers, and in our area--absentee land owners, is based on rehashed old news that has been repeatedly analyzed and responded to by County staff at various stages of this long-drawn out update process.

Public turns out primarily in opposition, though majority of planning groups support 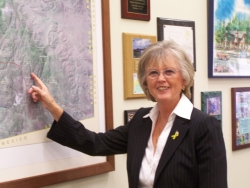 October 21, 2010 (San Diego) - After listening to seven hours of testimony from dozens of speakers for and against a controversial General Plan Update affecting much of East County, the county Board of Supervisors yesterday put off a decision until Nov. 10.

On that date, the board expects to hear from 150 more speakers over another seven-hour period—and it plans to vote on the entire Update package.