Update October 31, 10:20 a.m. -- The SWAT action has ended and a second suspect was taken into custody half an hour ago, Sgt. Randy Levitt has informed East County Magazine. The suspect's name and details of the arrest have not yet been released.

Exclusive! View our video of the SWAT team arriving on scene. 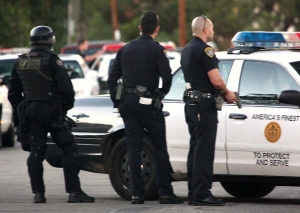 October 30, 2010 8:35 p.m.  (La Mesa) -- A stand-off continues tonight as police continue searching for a bank robbery suspect believed to be hiding in the Rolando neighborhood.  A second suspect, Davan Darden, 23, was arrested at 5:45 this evening.  The area remains evacuated, according to Officer Stafford, San Diego Police.