Update November 4, 2010:  The San Diego Medical Examiner’s office has identified Sergio Chan Mora, 54, as the deceased. His place of residence is unknown. According to witnesses, the driver of a Ford Explorer made an illegal u-turn on eastbound I-8 and struck Mora, who was unable to avoid the collision. 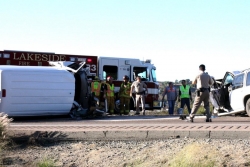 November 1, 2010 (Alpine) – I-8 east was shut down and a Sig Alert issued following a fatality accident on the freeway just west of Harbison Canyon late this afternoon, as ECM’s Viejas Wildfire & Emergency alerts informed subscribers earlier today. The rollover collision involved a white van and a second vehicle, with several parties trapped and requiring extrication. Smoke from one of the vehicles was doused with a fire extinguisher.