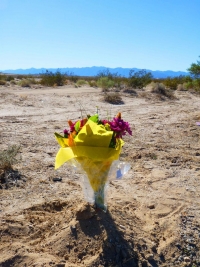 November 15, 2010 (Ocotillo) –The odor of burned rubber still hangs heavy in the air along Highway 98 east of Ocotillo, where five people lost their life in a horrific crash on Saturday. A lone bouquet of flowers in the sand serves as a silent memorial to four members of the Lakeside Saddle Tramp Club and a car passenger who died at the scene.

Update Nov. 14:  Authorities now say that the driver who fled the scene was in a gold Honda Civic

According to the CHP, a car crossed the center line on State Route 98 seven miles east of Ocotillo around 1 p.m., attempting to pass a group of motorcyclists. A  sedan veered to avoid a head-on collision with the car, then struck several motorcycles.