May 11, 2012 (San Diego) --San Diegans Richard Lederer and Caroline McCullagh are the proud parents of a bouncing baby book, American Trivia: What We All Should Know About U.S. History, Culture & Geography (Gibbs Smith Publisher, 2012). Over a span of a year, the co-authors will share with you their journey through American history. You can order inscribed and signed copies of the book by writing to richard.lederer@pobox.com. 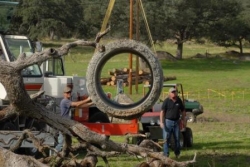 March 2, 2011 (Alpine) - Lions Tigers & Bears (LTB) has released new photos of construction at the rescue facility’s new Black Bear Habitat, which will be home to "Liberty," the young black bear cub rescued from the Mt. Baldy area last Fourth of July.
Currently, Liberty remains in the quarantine area, which, at her current weight of 157 pounds, she is quickly outgrowing.  However, without further funds, the construction of Liberty's home may come to a standstill, said LTB founder Bobbi Brink.  LTB still needs to purchase the fencing, the most expensive part of the enclosure, the roof for the bedroom area, as well as provide power to the area. 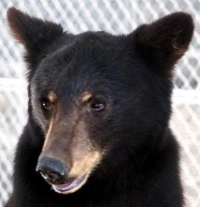