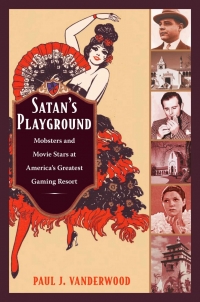 December 23, 2010 (San Diego)--Paul J. Vanderwood’s Satan’s Playground chronicles the rise and fall of the tumultuous, lucrative gambling industry that developed just south of  San Diego's border with Mexico in the early 20th century. As prohibitions against liquor, horse racing, gambling, and prostitution swept the United States, the vice industries flourished in and around Tijuana to the extent that reformers came to call the town “Satan’s Playground”-- unintentionally increasing its licentious allure to Hollywood stars and other celebrities of the era.