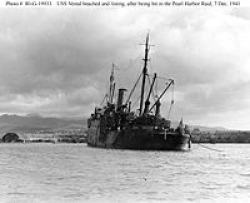 January 26, 2011 (El Cajon) – San Diego Sheriff’s deputies discovered a 93-year-old Pearl Harbor survivor living in “filth and squalor” in the 2000 block of Euclid Avenue in an unincorporated area of El Cajon. When deputies arrived yesterday, the veteran was holding a photograph of the ship on which he had served, the U.S.S. Vestal AR-4, which had been anchored next to the U.S.S. Arizona during the World War II attack.