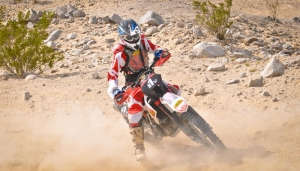 February 2, 2011 (Ocotillo)- The Over The Belt (OTB)-promoted Jeff Cady 100 Motorcycle/ATV race kicked off the District 38 season on Sunday.  A crowd estimated at 500-800 turned out, including 140 racers and their families, making this one of the highest attended season openers in years.

OTB club president Steve Orton said, "This kind of turn out just shows that local racers are eager to start the season and willing to support racing in the local desert."