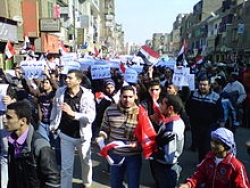 The Egyptian military is currently in charge, leaving questions over who will ultimately fill the void left by Mubarak and when democratic elections may occur. Still, news of Mubarak’s departure has been greeted with cheers in the streets of Cairo and cautious optimism by most world leaders.