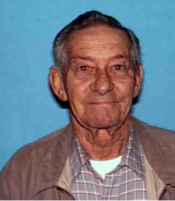 February 12, 2011 (San Diego) – San Diego Police seek help to locate an elderly man who has medical issues from a recent stroke. Richard Johannis, 79, has been missing since Thursday night, Feb. 10 at 9 p.m. and has no coat or warm clothing with him.