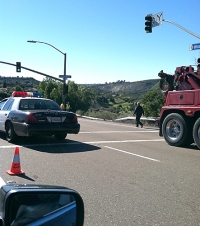 February 12, 2011 (San Carlos) – The driver, 33, of a 1993 Chevy truck is dead after rolling 150 feet down a steep cliff.  He was traveling northbound on Golfcrest and went straight through the intersection at Mission Gorge Road, crashing through a guardrail around 10:30 a.m., according to San Diego Police.