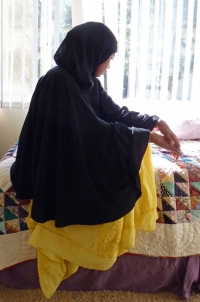 ECM conducted exclusive interviews with people who fled war-torn Somalia and were granted asylum in the U.S. Fearing retribution against family members still in Somalia, the asylees agreed to speak out under condition that their identities be protected. The stories below are real, though the names are pseudonyms. Their tales describe dramatic round-the-world journeys to reach America, hardships endured on the road and inside U.S. detention facilities, as well as hopes for the future as they start new lives through Project Refuge in San Diego.

February 17, 2011 (San Diego’s East County) – Aisha comes from a rural area near Mogadishu in Somalia. “I couldn’t take it anymore,” she said of the fighting and war-torn conditions that led her to flee her homeland.