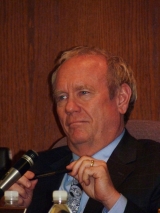 Multiple locations on district campuses were available, but GUHSD chose to use church instead, ECM research reveals

February 18, 2011 (San Diego’s East County) – Americans United for the Separation of Church and State, a national nonprofit organization, says that it’s “problematic” and likely unconstitutional for the Grossmont Union High School District to host a school event at Sonrise Church, a fundamentalist place of worship in Santee.