March 10, 2011 (San Diego’s East County) – Candy Jenkins was looking forward to seeing environmental evidence presented to a federal judge in San Diego on Monday. “I live on El Capitan Mountain,” said the Lakeside resident, who  a 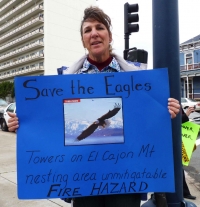 lleges that SDG&E is building Sunrise Powerlink towers only 2,000 feet from an eagles’ nest. She has photos, and says the eagles are tagged and the locations documented by the County. “Towers weren’t supposed to be within 4,000 feet,” she said. “We’re bringing this out today in court.”

Told by this reporter that the hearing had been cancelled because Judge Michael Anello announced that he will be ruling on the written record only, Jenkins expressed shock. “It’s heartbreaking,” she said. “Whatever happened to democracy in America?”