“This issue has received band-aid approaches to fix it when it needs a tourniquet.” – La Mesa Mayor Art Madrid

“We look at them as a resource… they are the eyes and ears of the community… they certainly know when something is going on.” – El Cajon Mayor Mark Lewis, on the homeless in his town

"I do not feel there needs to be a regional center for the homeless in East County." -- Lemon Grove Mayor Mary Sessom

"I am not in the homeless business." - Santee Mayor Randy Voepel 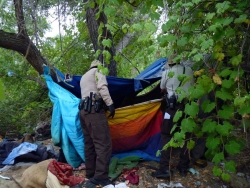 April 26, 2011 – Four East County mayors shared their reactions on a new study on the many homeless in our region. Their views differed dramatically on how to address the homeless problem.  In addition, three of the four mayors questioned the study findings and voiced doubts on the numbers of homeless people listed in their cities.

According to the 2011 Point-In-Time Count by the Regional Task Force on the Homeless, East County is now home to 8.9% of San Diego County’s homeless population, with El Cajon staking claim to the highest number of homeless people. However, the majority of El Cajon's homeless are in shelters--while in other East County communities, the homeless are living on the streets, in cars, or camped along riverbeds.