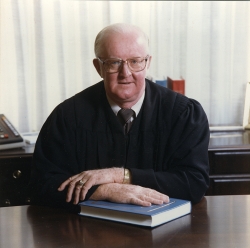 “Known for his keen sense of wit, long time East County resident Thomas Duffy will be fondly remembered as an attorney, former El Cajon City Attorney, San Diego Municipal Court Judge, and later San Diego Superior Court Judge,” said Mark Raftery, former president of the Foothills Bar Association. “While on the bench, he was elected by all the Judges in San Diego County to be the Presiding Judge and was instrumental in unifying the Municipal and Superior Courts.”