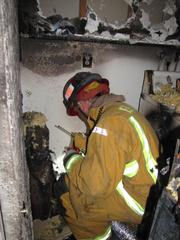 June 6, 2011 (El Cajon) -- Just before 10:00 a.m. this morning Heartland Fire & Rescue, serving the City of El Cajon, responded to reports of an apartment fire at 525 East Camden Avenue in El Cajon. As crews arrived smoke was coming from a second floor apartment. El Cajon fire crews, assisted by firefighters from the San Miguel Fire District, had the fire knocked down in about ten minutes. Quick action kept the fire from reaching neighboring apartment units. The exact cause of the fire is still being investigated, but it appears to have started in or around the clothes dryer area located in the middle of the apartment.

Damage has been estimated at $15,000 to the apartment and its contents. There was some smoke damage to an adjoining apartment. The family was at home at the time of the fire and were able to escape safely. The family will be staying with relatives. There were no injuries reported.