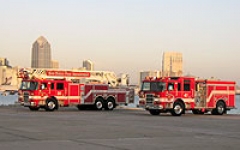 After staff projected that reserve accounts will have more money than estimated earlier, several proposals were made to utilize the new-found surplus. Council adopted an amendment proposed by Councilmember Marti Emerald to restore eight fire engines that have been shut down for over a year. Brownouts have been blamed for at least one death, a toddler who choked to death waiting on a fire engine with paramedics to arrive from a distant location while a station a block away was closed.