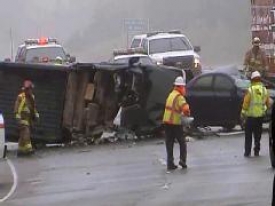 May 25, 2012 (Poway) – San Diego Sheriff’s office has revealed details in a high-speed chase that ended in a crash in Poway on May 22.  Two of the occupants were on probation while a third had an outstanding arrest warrant; all now face new charges.

December 30, 2011 (Poway) – A traffic accident caused a power outage in the Poway area briefly yesterday morning, seriously injuring the driver and sole occupant of the vehicle.

November 14, 2011 (Poway) – A westbound vehicle struck a pedestrian who was crossing Poway Road just west of Tarascan Drive at 8:55 p.m. last night. According to Sergeant B. Jenkins with the San Diego Sheriff, “The pedestrian was transported to Palomar Hospital with significant injuries.”

September 13, 2011 (Poway) – A 36-year-old Poway woman suffered a head injury and additional injuries when she was struck by a white pickup while walking on Valle Verde Road at Dorset Way in Poway. The accident occurred at 10:56 this morning.

August 10, 2011 (Poway)--Thomas Cantrell, III, 30, of Poway died of injuries sustained August 7th at 2:41 a.m. in an automobile accident.  According to witnesses, he was traveling at a high rate of speed eastbound on Poway Road when he lost control of the Mercedes he was driving and skidded down an enbankment, striking trees. 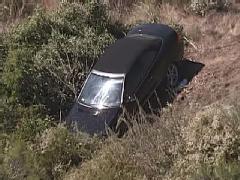 June 6, 2011 (Poway) -- A 57-year-old driver was rescued today after he lost control of his vehicle on Kirkham Way and plummeted 360 feet down into a valley.

Poway Sheriff’s deputies responded to the crash around 8:12 a.m. and found the black Mercedes, which was upright in the canyon despite hurtling downhill for hundreds of feet. A helicopter air-lifted the survivor and sole occupant out of the valley; he was then transported by ambulance to Palomar Medical Center, the Sheriff’s office reports.