Story and photo by Robert Lundahl

“We believe that DOI [Department of the Interior] is poised to violate the law and our rights to religious freedom and our cultural identities guaranteed by DOI’s own policies, the United States Constitution, and international declarations. We need your help.” --Chairman Anthony Pico, Viejas Band of Kumeyaay Indians, in a letter to President Barack Obama 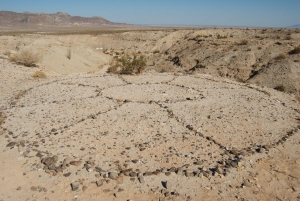 March 23, 2012 (Ocotillo) – For months, Ocotillo residents and conservationists have been waging a David and Goliath battle seeking to stop Pattern Energy’s proposed Ocotillo Wind Express project. Now Kumeyaay, Cocopah,Quechan and other Native American tribes have banded together to oppose the massive project-- joining residents, desert conservation groups and outdoor enthusiasts who seek to protect resources from destruction—including hundreds of cultural and archaeological sites.

On March 28, the Imperial Valley Planning Commission will rule on whether to approve the controversial project, which would generate power for San Diego County.  At the federal level, the Secretary of the U.S. Department of the Interior  is expected to issue a final decision  by May 1.  A petition seeking to stop the project has been launched by Ocotillo residents:  http://www.change.org/petitions/say-no- ... y-project#.

June 11, 2011 (Mesa Verde) -- La Cuna de Aztlan Sacred Sites Protection Circle and the Colorado River Environmental Warriors invite the public to join in a protest June 18 that tribal members hope will help stop destruction of  sacred Native American sites by approved desert solar power projects in California.   Native Americans have raised concerns about numerous desert solar farms planned in the state,  including a project in Imperial County that would bring power to San Diego.  The June 18 protest is slated for Blythe, however, where construction is underway and ancient geoglyphs are reportedly being destroyed.