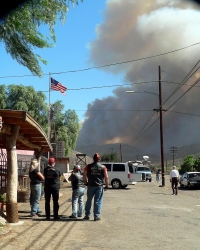 June 12, 2011 (San Diego’s East County) – Last week, as ECM reported, FEMA retracted its demand for Harris Fire survivor Veronica Lytle of Potrero to pay back disaster funds that FEMA had claimed were paid in error. Now FEMA informs ECM that 40 survivors of the 2007 California firestorms have been sent recoupment letters.

“FEMA received four appeals from applicants who were affected by disasters which occurred in San Diego County,” said a FEMA spokesperson who asked not to be named. “FEMA either rescinded or adjusted the amount identified for recoupment on three of the four appeals.”