Massive helicopters used in heavy-lifting operations such as Sunrise Powerlink 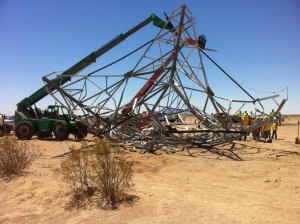 June 16, 2011 (San Diego’s East County) – Acting on a tip from a caller who said he used to work under sky cranes during forest fire operations, ECM has conducted an investigation into the safety record of massive sky crane helicopters such as the Erickson S-64F sky cranes that dropped two 16,000-pound tower sections last week during construction of SDG&E’s Sunrise Powerlink.

“One significant issue not being reported is the number of aircraft they, Erickson, have lost due to mechanical issues or operator error,” said the caller, who asked not to be identified but indicated he has worked on a ground crew under the aircraft and has never worked for any Erickson competitor.  He provided details on several specific accidents which an ECM investigation has independently verified.