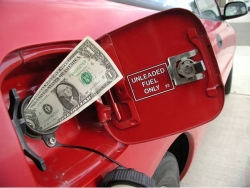 June 19, 2011 (San Diego) – Congresswoman Susan Davis (D-San Diego), whose district may soon extend to include La Mesa, part of El Cajon and other areas in East County with reapportionment, has joined several other legislators in sending a letter asking Attorney General Eric Holder to conduct an investigation into oil speculation.  The legislators seek to “determine whether illegal practices may be artificially inflating oil and gas prices” and also ask for “common sense limits" on the  trading of oil futures.

“It's infuriating that major oil companies continue to profit from tax exemptions while American families struggle with rising gas prices," Davis said in a letter to constituents. "I joined in sending a letter to Vice President Biden asking him to make sure that cutting unnecessary tax subsidies for major oil companies is part of a deal to reduce the deficit.”