July 7, 2015 (San Diego’s East County) - Dave Patterson, a Ramona resident and member of Veterans for Peace, has brought a fascinating story to our attention. The San Diego Maritime Museum has refused to allow Veterans for Peace to dock its ship, the Golden Rule, at the museum of maritime history. The ban is due to political reasons and a claim that the ship is not historic—despite the vessel’s success in helping bring about a ban on nuclear testing and inspiring generations of activism among peace and environmental groups through the daring actions of the Golden Rule’s crew on the high seas. 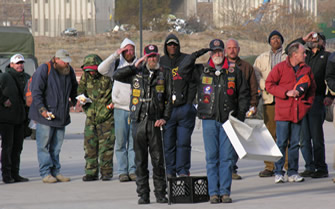 “So far we have distributed 145 sets, and are seeking donations to continue,” said Ramona resident Dave Patterson, Veterans for Peace spokesman.  The group seeks donations of cash, sleeping bags and ponchos to help protect local veterans from winter storms and cold.  Last year, more than 60 homeless people died on the streets of San Diego, many from exposure to harsh winter weather. Editor's Note:  Military authorities declined to speak with East County Magazine regarding this story. We also requested permission to interview veterans at Balboa Naval Hospital to obtain a diverse range of views on conditions in mlitary service.  Our request was denied.

October 18, 2008 (San Diego)--Army intelligence officer Selena Coppa has risked her freedom to speak out.  “One of my soldiers died. He had PTSD (post traumatic stress syndrome),” she said.  “It was ignored.”

After she revealed the truth about the soldier’s death, Coppa told East County Magazine, her commanding officer threatened her.  “He said if he’d known what I was going to do,  he would have put me in Walter Reed in the mental ward and made sure I never got out.  Then what would happen to my little girl?”

Coppa and Hess accuse the U.S. government and military officers of neglecting soldiers with serious mental health problems and of fostering a climate of intimidation against those who speak out.