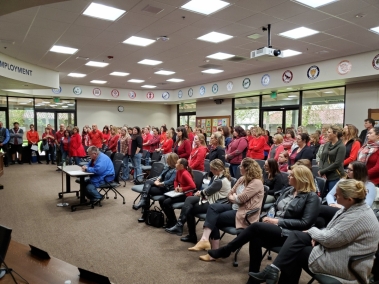 March 31, 2020 (El Cajon)-- Cajon Valley Union School District (CVUSD) Superintendent David Miyashiro, EdD and Board of Trustees have walked into a new controversy after reports by NBC San Diego and the San Diego Union-Tribune on pay raises authorized the district board.

Following a call to action by the Cajon Valley Employees Association (CVEA), some 100 CVUSD teachers wearing red t-shirt and coats gathered in the CVUSD boardroom on March 10, the last board meeting before the district shut down due to COVID-19. In no uncertain terms, employees let the Board of Trustees and district cabinet know of their unhappiness with recent pay raises given to Superintendent David Miyashiro, EdM and others.

A day before the meeting, the CVEA released a statement via Twitter to its members saying, “After careful consideration and thought, the CVEA Executive Board has decided to respond to the recent indulgent pay raises given to a few select district administrators. This unfair and thoughtless action sheds light on how our board feels about who should be compensated and by how much. We believe this action reflects the feelings of the overwhelming majority of our members and therefore we ust speak. Thank you for your help and support.”

In recent weeks both NBC San Diego and the San Diego Union reported that Miyashiro is now San Diego County’s highest-paid Superintendent, making over $425,000 in salary, benefits, and other compensation.

The Cajon Valley Union School Districts covers the central portion of El Cajon and has just under 16,000 students.

NBC San Diego also reported that Miyashiro is slated to take home more than $76,000 by cashing out his unused vacation pay accumulated since 2017. He also has a $300 monthly expense account and an $800 monthly car allowance, according to his contract. After initially agreeing to speak with NBC San Diego Investigates, he later sent an e-mail expressing displeasure with NBC San Diego’s previous reporting on district finances.

San Diego employment attorney Dan Eaton of the law firm of Seltzer, Caplan, McMahon, Vitek, says that the elected school board members set Miyashiro’s pay, but Eaton told NBC that taxpayers have the final word on the board’s decision-making. “If this is something that concerns the people in the district, they ought to speak up. And if they are not satisfied with what they are getting from the school board, they ought to take action at the ballot box.”

El Cajon voters did just that on March 3, when they solidly rejected the district’s $221 million-dollar bond measure last week on a 55 percent-to-45 percent vote.

East County Magazine’s own investigation on Miyashiro’s $425,000 salary finds that he receives more than twice the salary average both of similarly sized districts nationwide as of 2017-18, the most recent data available, and nearly twice the average statewide in California.

A similar study published by the California Department of Education (CalEdFacts) for elementary school district superintendents reports an average salary of $224,581. 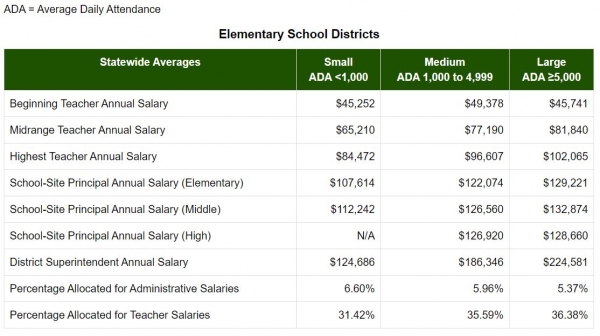 e Friday before the March 10 meeting, Miyashiro in a recorded CVUSD District Broadcast intended for district personnel called out the recent reports by NBC San Diego and the Union-Tribune as “irresponsible.”

“There have been quite a few news stories that have caused a great deal of concern and questions and rather than put out a statement we wanted to speak to you directly,” Miyashiro said at the beginning of the video.

Before introducing Assistant Superintendent Buxbaum to communicate the district’s position on pay raises, Miyashiro said, “we just finished a bargaining season with all of our employee groups and there have been some misleading stories in the news…some irresponsible journalism that has led to some questions about fairness, equity and just what types of salary increases were provided to our employee groups. No better than our chief business officer Scott to help us communicate that.”

Buxbaum said, “All of our employee groups, including cabinet, received a three percent ongoing salary increase this year and one percent off schedule. And for next year, since it was a two-year deal, you get all get two percent on scheduled money next year. So that is true across the board, no matter what employee group you are present, including cabinet, we all got the same. There is a misunderstanding about certain members of cabinet. I'm getting 15 percent raises. And why is that different than what our employee groups got?”

He continued, “Like every employee group, we all have steps in our built into our salary schedules and that's meant for longevity with the district. And so that's something that cabinet moved up the step along with the increases. Like many of our employees did that same time. It just because cabinet is focused in getting that out and being transparent, those salaries are actually presented. But both those things combined into one. But all of our employees who are moving and down the steps also got similar type increases above and beyond what the board gave out.” 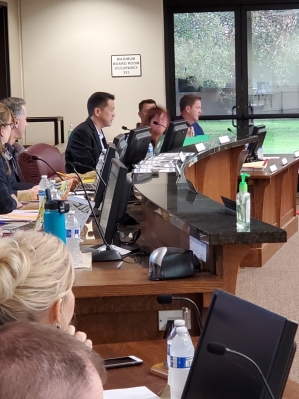 ECM requested by e-mail complete verifiable documentation of Buxbaum’s statement on March 6 from Buxbaum. He did not respond.

With some 100 teachers rising to their feet to stand in solidarity during CVEA treasurer Ken Williamson’s statement, he said, “We care very much about the public perception of our district and are only here to speak truth to you. When I finish speaking, I fully expect to restart meaningful conversations with you all about equitable compensation models and how we can improve our communication to avoid the need to be here in mass.”

Williamson concluded, “In our world that is referred to as this very treatment now cabinet and superintendents are entitled to earn a fair wage, receive earned stuff in column increases in raises. However, when they are the only employee group to have their salary schedule extended once maxed out at the top of their salary schedule, the home Valley, we now have a problem not having our salary schedule extended. It makes us feel even more unvalued when you realize that during bargaining, we were told that there absolutely were no funds for any word salary increases above and beyond what was offered for step in column and raises.”

Afterwards, in an uncommon open disagreement with a sister union, California School Employees Association (CSEA) Chapter 179 president Mark Reagles openly defended Miyashiro’s raise in sharp contrast to Williamson’s statement. Reagles said in part, “There's a reason why when I look at Cajon] Valley versus all the other school districts around us, our employees are paid higher than all the school districts around us. Are they paid with they’re worth? Absolutely not. Absolutely not. In fact, I'm looking at teachers in this room right now that are worth 10 times what they're paid. And if I had the money, I'd give them to them. But great leadership is expensive. It's not cheap. And if we want cheap, we can get cheap. And I'm pretty sure those same teachers and the same staff and everybody else that works for this district will be back in here for another reason or the reason that the leadership is not what they want it to be.”

CVUSD Board President Tamara Otero and trustee Jim Miller then opined their accolades on the accomplishments of Miyashiro.

In order to avoid a direct face-off with members of the teacher’s union which  filled the boardroom earlier, CVUSD vice-chair James P. Miller offered a direct comment on the union action at the end of meeting.

Miller said in part, “Again, I don't blame [teachers] for being esoterically being upset that the administration has higher salaries, same point in time. If you want to be administrators and want to make these higher salaries, love to train, love to give you those opportunities. There's nothing that prevents anybody in our district from moving forward and doing different things. We'll support that career change, support that endeavor. Let us help you get where you want to be. I have a lot of friends who are teachers both in this district and outside, not a single one of them went into teaching because of money. They all love the summer.”

ECM has forwarded an audio recording and a transcript of Miller’s statement relating to the protest to Prokop for comment, but did not receive a response.

Voice of San Diego on Thursday reported that Miyashiro sent an e-mail to them blaming the loss of the school bond measure on “low voter turnout.” He promised that the district would be back to voters in November with another bond measure on the ballot.

“Staff will recommend moving forward in November based on the severe needs outlined in our Facilities Master Plan,” he wrote.

The editorial board of the San Diego Union-Tribune took notice of the slew of school districts like Cajon Valley throughout the state of California which had bond measures turned down by local voters.

The editorial stated, “So how are districts trying to make ends meet? Often by using 30- or 35-year borrowing to pay for short-lived electronic devices and routine maintenance. This can be seen as a refusal by school boards to live within their means. More charitably, it can be seen as a sign that teacher unions are right, that teachers need adequate, properly funded pensions — and that school districts need more resources.”

The Union-Tribune editorial continued, “Voters might be open to that argument and to higher taxes — but only if accompanied by teacher and administrator accountability and student tracking reforms that have helped schools in Massachusetts, New Jersey, Florida and Texas.”

The bond measure defeat occurred before the COVID-19 pandemic shut down schools indefinitely, so it is unclear what the short-term and long-term impacts on school district budgets will be – or whether many voters now economically impacted by business shutdowns, layoffs and other economic hardships related to COVID-19 may vote on future school bond measures.