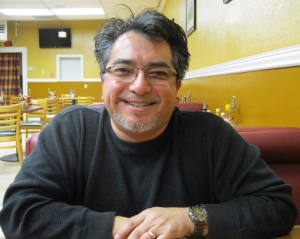 January 12, 2015 (San Diego’s East County)--Dave Rivas has a unique way of connecting with people as both a 911 dispatcher for the San Diego Fire Department and a multi-talented voice over artist, actor, and sound designer. 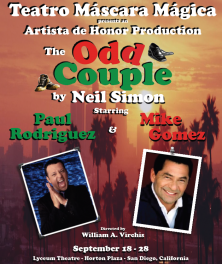 A review by Reina Lisa Menasche

September 21, 2014 (San Diego)--What do you get when you cross Neil Simon’s classic 1960s New York comedy “The Odd Couple” with modern day, southern California references and Latino color, characters, innuendo, and ad libs? A surprising and delightful rendition, zestily presented by the Teatro Mascara Magica at San Diego’s Lyceum Theatre. Dave Rivas, co-producer and co-director of the production, is a Spring Valley resident.

The theme of the play remains true to the original and is universal: divorced bachelors, slob versus neat freak, in a friendship strained not only by conflicts over living conditions but also the poignancy of loss and change. But the seasoning on this well-known dish of a show is exotic, original, up to date, and hilarious.